Back in June we started dreaming about building a play park at church. Lots of research was done, and we kept coming back to the fact that we wanted to make it as challenging as possible. We also really wanted to try to do it ourselves - not spend thousands of dollars on professionals. In addition, it needed to be as natural as possible - not one of these modern plastic and metal marvels that look amazing but are boring, and leave nothing to the kids' imaginations. Many of the apparatuses were to be built with beetle-kill wood and we planned on  bringing in several massive rocks for the edges of the play area.

Well, three months later (almost to the day) from when we started by trucking in the rocks, we are done. For now. The snows are almost upon us, so we have decided to leave anything else that still needs to be done until the spring.

It has been an amazing project to tackle - challenging for sure, but very very rewarding. It has also morphed as we went along. Mostly it looks like the original design, but several things that didn't quite work were changed, and where there were genuine safety concerns we tweaked designs too.


Most of the lumber was donated, along with the use of bobcats and augers to dig the foundations and clear the area for the pea gravel. All the concrete and pea gravel was also donated; as were the fireman pole, the baby swing and both slides.

Rather than leave you with hundreds of photos, I'm sharing the video that I played in church today.

A pole, two men and nary a fire to fight

This is totally backwards - I wanted to write about how the playground at the church was coming along, since my last report back, but I just don't have time. So, instead, I leave you with just three pics of Tim and Adam working on getting the "fireman's pole" ready to install...

I'll try to give feedback on our workday, and how far we've come with the tree house, this week still.

I'm beyond excited to see the progress, I must say! 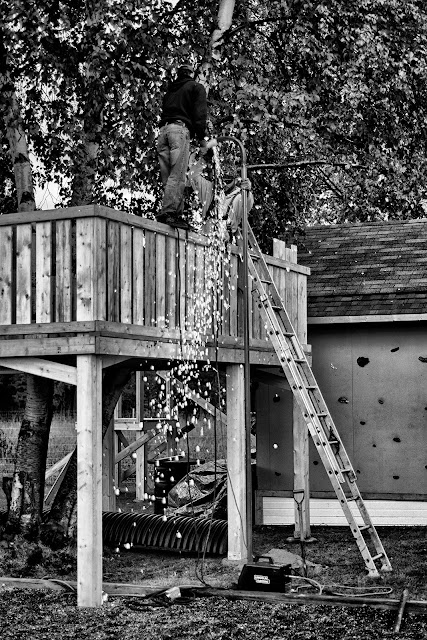 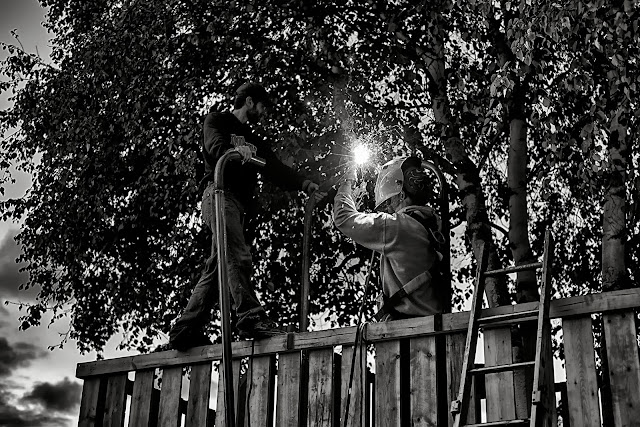 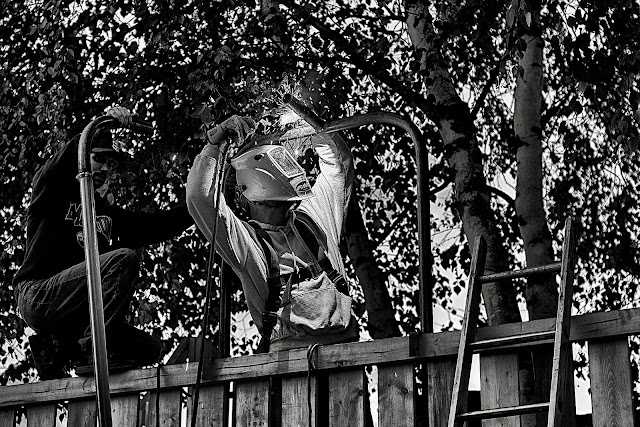 I belong to one of those online buy and sell / trading networks on Facebook here in small-town Canuckistan. Although I don't buy or sell much through it, it does provide the odd educational moment, as well as plenty of laugh-out-loud moments for this cynical soul ...

Attached, just a smattering of posts from the last day.

Is that it, summer?

Last week it was in the 30s here. This morning I woke up and ... it wasn't. I am, as a result, slowly having to come to terms with the fact that it is going to get much colder and that I may need to source some long pants, closed shoes and a sweater or two.

Hey, I may even go all out and try to find a warm jacket and some ice skates too. Apparently weekend social hockey games are essential to winter living here in small-town Canuckistan.

My only concern as the winter approaches is what I'm going to do with my dark glasses now that it's getting darker earlier and earlier ... People may not recognise me at church if I'm not wearing them!

In the meantime, here is one last look back at one of the many perfect days Summer dished up for us last month - when we took a quick jaunt out to the Cottonwood River north of town.

If you build it they will come (continued)

So, yesterday I started sharing about the play park we're developing - and I posted pics of the rocks, mini fort, climbing wall and laying of foundations.

Next came some of the most exciting additions - three free-standing climbing posts. And, amazingly enough, these seem to be the most popular items that we've installed thus far. In fact, I was chatting to my unofficial official 9-year-old tester this evening who informed me that they were her favourite part of the play area by far. She was quite downcast that they had been removed (temporarily). But more on that later.


Next up came the majority of our balance apparatuses. These include an inclined balance beam, a high beam, tyre and stepping posts (for want of a better name).

Most of the wood is beetle-kill pine (read up on it on Google if you don't know what that is) - an amazing metaphor of life coming out of death. And it looks pretty cool too.

The tyre has been filled with pea gravel to weigh it down, and ringed with planks so that kids and other critters can't climb inside. Once again, Bill did much of the work with help from various volunteers. The earth here is pure clay and so digging the holes for the balance posts was quite a challenge with the smaller auger.

After the frenetic couple of weeks' work we took a bit of a break - mostly tidying up rough edges, coating the wood and the like. Then, this Monday, in came Dave, owner of United Concrete & Gravel, his wife Colleen, Sam and Caleb to dig out the the area below all of the high apparatuses for pea gravel. We tried using the Bobcat between the high posts but eventually just pulled them out to make it easier for us. That was an all-day job, and we carried away three truck loads of earth.

The seven-year-old boy from across the road in the pic above ("Heed") was chatting to me while helping shovel dirt. It went something like this:

"My grandma and I were just talking today and we both agree that most play parks are pretty boring because they are just too safe. But this one isn't safe at all! We love this one!" And I agree. We must be doing something right if the seven-year-old thinks so!

And that's where we are at. Tomorrow we will be concreting in the free-standing climbing posts, and will be bringing in three truck-loads of pea gravel on Friday. We will also hopefully be going to haul some beetle-kill wood to mill in the next couple of days - for the tree house and to border the pea gravel pit.

Then, on Saturday, we are having a big work party here where we are hoping to get as much of the tree house built as possible! Exciting times...

I'll update you as soon as possible!

If you build it they will come

One of the main projects I undertook here at Lakeview Church was to build a kids' play park out back. We have so much space behind the church that a few of us immediately started dreaming about how best to utilise it - the play park being just one of the ways.

We wanted to create something that not only the church kids would enjoy, but that would draw children and families from the community surrounding the church. The famous line from Field of Dreams kept coming to me, but in my case it went "If you build it they will come."

I did hours of research about current trends in play park building, safety protocols, designs here in Canada, in the US and in the UK. And finally, after much brainstorming, we decided on a model - using as many natural materials as possible.

One of our main aims was to build a fun, challenging play area. Current research shows that play parks have become so safe and devoid of adventure that few children want to play in them. And judging by all the empty play parks that I drive past every day, I believe it. Another interesting fact that emerged was that if children didn't learn to overcome their fear of heights early, that they would carry it into their adult lives.

And so that is what we have set out to create - a challenging, fun park - the way they are meant to be.

I won't go into details about the planning and logistics, but will try to explain how we have arrived where we are - with the help of volunteers, donations and bloody-mindedness!

First came the rocks - inspired by a gigantic one in front of the church, that kids come to play on from far and wide. One mom across the road told me that her teenage daughter had grown up playing on it.  And her nine-year-old has become my unofficial "tester" whenever we finish installing one of the apparatuses.

It all started with Brian and me going down to United Concrete & Gravel's pit to pick out some of the largest, meanest rocks we could find. Two of them were the heaviest that the machinery at United's disposal could move ... Obviously we picked those!

Before I was really ready to launch (in my mind, anyway) one Tony B called to say he was on his way to pick me up: that it was rock moving day. The rocks put up an almighty fight, but Tony refused to give up, and we won in the end.

Our next project was the "mini fort" for the smaller kids. The fort was designed and built over an unsightly storm water culvert by Bill, whose mantra is, "We can do it, we have the technology." Adam, another chap from church, donated the slide within minutes of hearing of our need for one.

Then came the climbing wall. This was built on the side of an existing tool and storage shed. First, Bill extended the roof, then we painted five sheets of plywood, bought beginners' holds from MEC in Vancouver, bolted them on and screwed the sheets to the shed. It's anything but easy to climb but a few of the kids are getting close to conquering it (and even an adult or two are trying).

Next came the foundations for the tree house, which we will be building around one of the trees. It also includes a free-standing tower, which will have a rope bridge leading to the main tree house. And then there will be swings off to the one side too. Again, United concrete supplied the auger, which we used to bore the holes, and the concrete.